Nick set us a really tough night challenge in Pukekura Park, but we all had so much fun that there have been requests for more of these!

The membership can truly be proud of their efforts as a club. We have all worked towards a common goal for the club, namely by holding orienteering events. We have run 40 navigation events over the past year. These consisted of 21 foot orienteering, 18 rogaines of which 14 were mixed bike/foot urban twilight events, and 1 mountain bike orienteering event.
Well done to all the organizers, setters, controllers and helpers, you have made this a successful and enjoyable year for the club members & casual participants.
Major events during this period included the Wellington Regional Championship (3 events at Wanganui/Whanganui), the WOMAD weekend consisting of the NZ JWOC trials/WOA OY1/Taranaki Masters (3 events) and the orienteering & rogaine championships.
During the past 12 months the club has purchased electronic event management equipment, SportiDent, (with the aid of some funding from NZCT), a laptop, generator and other equipment required to run events. Mapping, both new areas and the updating of existing maps, has continued over this year.
Financially the club is in good shape. I would suggest that the new committee can now look at preparing a budget to aid future developments and activities.
I thank Suzanne Scott on behalf of the club for over 17 years she has served on the committee. During this period Sue has been the club secretary, newsletter editor, (she received NZOF Newsletter of the Year Award in 1997), event coordinator, plus filling in numerous other roles. Sue was fundamental in the successful procurement of funds from charitable organizations over the past few years  Sue has had many ideas to add value to our club and pool of navigation sports & fun events it offers plus her abilities to put those ideas into practice has given the club the likes of the annual TSSSA Rogaine and infamous Wine-O. Sue, your contributions at committee meetings will be missed.
Carey Nazzer has served on the committee for the past 12 years being newsletter editor, secretary, treasurer & all 3 combined for much of the time. Carey’s behind the scenes approach has made her a bit invisible and somewhat unsung as she just kept some of the administration side of the club ticking over. Thank you for the effort and work you have put in Carey.
Special thanks must also be given to Jacqui Sinclair for the success she has had in creating regular club events and setting the calendar up for future events. She and Neil have always stepped in when there has been work to be done and her skills in event co-ordination are second to none. I personally cannot thank you enough Jacqui as your abilities and self motivation have made my tenure as President a lot easier and more successful.
Don Patterson also departs from the committee. Your efforts and good work for the club over the past few years has been welcomed and appreciated.
Support for club activities continues to grow with many new faces appearing at events; hopefully we will be able to convert a large percentage of these people into members in the coming years.
Thanks to our major sponsors of the urban rogaine series; Kiwi Outdoors (Rob Needs), Mitchell’s Cycles (Blair Cox) and Bubbles Early Learning Centre (Annie Sanderson & Nick Collins).
2011 is looking good from a club point of view. With our event schedule of an event on the first Sunday of the month, twilight urban rogaines on Wednesday evenings during the summer (daylight saving period) plus various additional events, training sessions, etc there is an event almost every other week.
Last years request for more assistance in doing small jobs at events was greeted well and generally the assistance given was great. Thank you all, please continue with this support.
As outgoing President I wish my successor all the best.
Robert Newbrook
President - Orienteering Taranaki
Posted by EOC4EVA at 1:07 PM No comments:

Roy and Jan have been scouring the city for new locations so come along to Flyger Lane for an hour or so of rogaining and discover more of your inner city.
Start between 12 and 1pm in Flyger Lane, off Gill St. You can drive in beside MasterTrade or Totally Foods (104 Gill) - plenty of parking. Bring a pen to answer the questions.
Posted by EOC4EVA at 8:41 AM No comments: 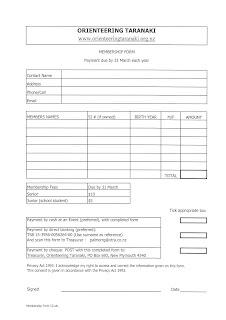